Adorable and sexy all at once, this second chance romance features a combination of humor and heart. Orgeron will make you fall for this hero, whose singleminded focus on getting his wife back is downright endearing. He knows he messed up in the past, and there is nothing that will stop him from making things right this time around. The writing is solid, the characters are likable, and the tone stays light and fun for the bulk of the book with some shots of angst along the way. I loved that our heroine is Latina without feeling like a stereotype, with some great scenes embracing her heritage. Only minor complaints hold me back from calling this 5 stars (more on that later).

The story follows Liam and Nya, parents to an 11-year-old daughter. They married young and seemed perfect for each other, but dumb financial decisions (on Liam’s part) and insecurities (on Nya’s part) caused them to divorce. When their daughter makes a birthday wish that her parents get back together, they find themselves making the drunken decision to get married. Liam sees this as his opportunity to put his family back together… he just has to convince Nya to get onboard.

Second chance romances aren’t always my favorite, but this was written in such a way that it stays light and doesn’t linger on the time they spent apart. They’re just two genuinely compatible people who let circumstances get in the way. Liam is the best part of the book – he’s such a great guy and openly admits that he made mistakes in the past. Two things hold me back from calling this 5 stars, but they‘re pretty minor. First, while the first half of the book is light and moves along quickly, the second half dragged a little bit. I can’t say why without offering up spoilers. Second, this is just something that rubbed me the wrong way but was resolved quickly – Nya has a boyfriend when they get re-married at the start of the book. *Technically* no cheating occurred, but you’d better believe it’s problematic. It was also irrelevant to the story as a whole, so I’m not sure why it was included given how strongly some readers will respond to that – it doesn’t give the best first impression of Nya. That being said, it’s resolved right away and played no part in an otherwise heartwarming book. We meet some characters in this that I would love to read future books about, so here’s hoping there are more on the way. I received an ARC via Give Me Books and am voluntarily leaving a review of this sexy/sweet romance.

Who says you can’t marry the same mistake twice?

Liam Watts is the bane of her existence.
Her first love. Father of her child. And breaker of her heart.

Oh, he’s also her ex-husband. Well, he was, anyway…right up til this morning,
when she woke up beside him in a Vegas hotel room, sheathed in satin and tulle
with a sinking feeling in the pit of her stomach.

If it were just between the two of them, an annulment would be the obvious
solution. After all, they wouldn’t be the first to marry and divorce at the
little white chapel in the span of twenty-four hours.

But their daughter’s greatest wish has just been granted, and if there’s one
heart Nya wants to protect more than her own, it’s Ellie’s.

So, she promises to give it six months.

There’s no way she’ll be swayed by his thick southern drawl, those well-defined
abs, or that annoyingly delectable scruff lining his cheeks.

Nope. She’s got it all under control. Six months of playing house, then
everything can go back to the way it was before.

But first she’ll have to muddle through marriage with Liam—take two. 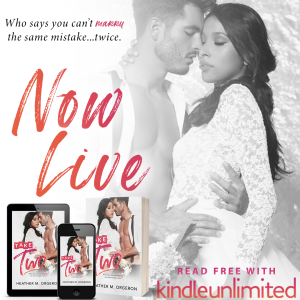 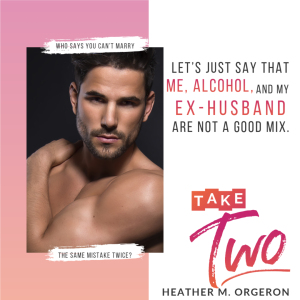 Author Bio
Heather M. Orgeron is a Cajun girl with a big heart and a passion for romance. She married her high school sweetheart two months after graduation and her life has been a fairytale ever since. She’s the queen of her castle, reigning over five sons and one bossy little princess who has made it her mission in life to steal her Momma’s throne. When she’s not writing, you will find her hidden beneath mounds of laundry and piles of dirty dishes or locked in her tower(aka the bathroom) soaking in the tub with a good book. She’s always been an avid reader and has recently discovered a love for cultivating romantic stories of her own.
Author Links
WEBSITE
FACEBOOK
FACEBOOK GROUP
TWITTER
INSTAGRAM
PINTEREST
GOODREADS
NEWSLETTER 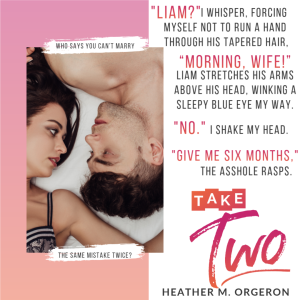