While I usually like Stacey Lynn’s work, and I really enjoyed the first book in this series… I’ve got problems with this one. The writing is as solid as ever, I loved that the hero isn’t a playboy, and there are some sweet moments. But there were also several things that rubbed me the wrong way, and they built up as the story went on (more on that in a minute).

The story follows Mikah, a 23-year-old hockey player whose sole focus for the last several years has been the sport. His teammates convinced him to let loose on his birthday last year, and he wound up spending the weekend with a puck bunny… learning about a different kind of sport, if you will. It was a carefree weekend that Mikah didn’t expect would have any long-lasting effects… until his cute neighbor, Paisley, lets him know that a baby was dropped at his door. Mikah is clueless about babies, so he has to rely on Paisley’s expertise to help him get through. As the two spend time together, attraction grows and the two young neighbors have to figure out where things go from here.

I love a good sports romance and the first book in this series satisfied. And while I liked Mikah at first, I grew to strongly dislike him as the story went on. He’s young, naive, and reading about his weekend with the baby’s mother is not something I really wanted to do. He’s also aggressive (kissing Paisley while she’s protesting), dominant (in the bedroom), and has a few violent thoughts that made me cringe. It’s… not a great combination. The first book in this series was sweet and sexy, while this one reads a lot younger and focuses on the lust. There also weren’t a lot of tender moments that didn’t focus on Mikah’s gratitude towards Paisley for helping with the baby, and that’s a problem. All in all, I wanted to like this – and I DO like the series – but this particular story wasn’t for me. I’m intrigued to read the next book in the series, appreciated receiving an ARC, and am voluntarily leaving a review of this sports romance, but it wasn’t my favorite by the author.

Sometimes scoring off the ice leads to the greatest rewards.

I’ve had only one goal in life since I first strapped on a pair of skates—make America’s pro hockey league.

I left Denmark. I made it to the top. Now, I’m determined to be the best. No distractions. I eat, sleep, and breathe hockey.

Until my birthday when my teammates convince me to live a little.
But living a little takes on a whole new meaning when less than a year later I’m confronted with a crying baby on my doorstep, drooling on a note that declares he’s mine.

Suddenly, I’m a single dad in way over my head.
There is no playbook for situations like this.

Luckily, I have Paisley.
My gorgeous neighbor, my long-time crush, and now—my savior.
She’s there any time I need her.
Helping. Guiding. Gazing at me with those green eyes that make me feel capable of this after all.

With her at my side, I’m quickly learning there’s more to life than winning a hockey game. 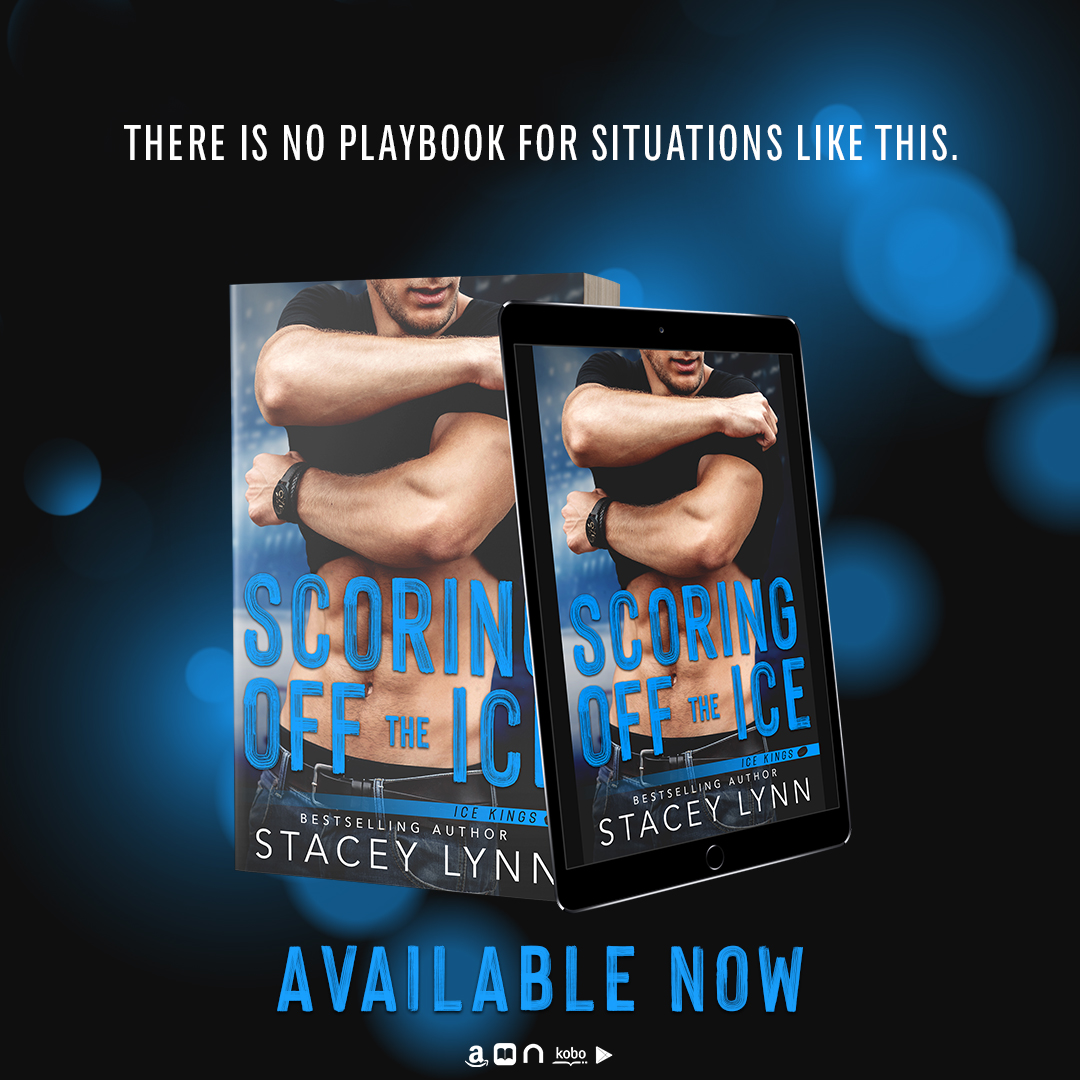 Add SCORING OFF THE ICE to Goodreads: http://bit.ly/37I5oyC

“Who are you?” I don’t like calling her the woman. I’ve wondered her name for months since she started appearing in that doorway so close to mine.

She turns to me and in her arms is the baby. She’s holding a bottle and the baby is drinking. Quiet little sounds come from it and she grins down at the baby in her arms before tilting her head at me.

“Paisley. Are you Mikah?”

She must want money if she knows my name. Perhaps she’s a fan. A puck bunny—that’s what my teammates call the girls who follow players and only want one thing from them.

“How did you know?” I wish she wasn’t so pretty. Sometimes it hurts to talk when all I want to do is look at her.

She points to an envelope on the table. The note.

“A stranger shows up at my door with a baby in her arms, saying it’s mine. How okay am I supposed to be?” I wander to the table while I ask.

I’m surprised by her gentle laugh.

“I suppose this isn’t your typical Friday night.”

She is funny. If I didn’t think I might throw up, I might laugh. No. This is not my typical Friday night. Mine are for resting. Not life-changing drama.

I say nothing and grab the envelope. I stare at it for a moment. Perhaps if I do not open it, I can pretend this didn’t happen. My fingers shake as I tear it open.

The envelope is larger than normal and thick and I’m careful as I pull out several folded papers.

The top one is the most important though as I instantly see my name, written in scrolling black ink.

His name is Angelo.

Stacey Lynn likes her coffee with a dash of sugar, her heroes with a side of bossy, and her wine a deep shade of red.

The author of over thirty romance novels, many of which have been best-selling titles on Amazon, AppleBooks, and Barnes & Noble, she loves being able to turn her vivid imagination into a career that brings entertainment and joy to her readers. Focused on sports romance and emotional, small-town romance, she also loves stretching herself in different genres.

Born in Texas and raised in the Midwest, she now makes her home in North Carolina and loves all things Southern. Together with her ultimate tall, dark, and handsome hero, she has four children. Her life is a chaotic mess that fights with her Type-A, list-making, neurotically organized preferences and she wouldn’t have it any other way.