What a bright ray of sunshiney happiness this was! I always love Pippa Grant’s quirky rom coms, so I knew I was in for a good read, but this has got to be one of my absolute FAVORITES from her. It’s light and funny and oh so sweet with a couple that you will be rooting for from start to finish. I loved this hero once I got to know him a little better – Brooks is kinda broken at the beginning of this book, and it takes some TLC from our heroine before he finds his happy again. It’s refreshingly delightful from beginning to end, and the perfect book to kick off this new series (though there are plenty of appearances from old favorites)!

The story follows Brooks, a baseball player who seems to have a curse. Every time he gets past second base with a woman, his game falls apart. For that reason… he’s never gotten any further than that with a woman. When Brooks was playing for a winning team, the sacrifice to his love life seemed worth it, but now that’s he’s been traded to the worst team in the league, well… he’s ready to make a few changes. Desperate to lose his v-card to any woman who will have him, Brooks turns into a bit of a horndog. The only problem? Super fan Mackenzie knows about the curse, and she is determined to stop him before he crosses that line. While Brooks might think Mackenzie is a special kind of crazy, it’s not long before the two shift from strangers with conflicting goals to something much deeper.

This might just be my favorite read from Grant, and that’s saying a lot. It’s quirky and kinda ridiculous but so, so funny. I loved both of these characters and their strange journey to happy ever after, which is actually surprising given how much OW drama there is at the start of this. Naturally, Brooks is trying to lose his v-card, so it’s not without its drama, but Grant handles everything so well that it was never really a problem for me. And the payoff… so, so worth it. I loved the buildup of intimacy and the changes we see in both characters throughout the course of the book. It’s light and funny from start to finish, but there’s that underlying layer of depth that I love about Pippa’s books. All in all, a really great, fun read, and I cannot wait for more from this series. I was lucky enough to receive an ARC via Give Me Books (then purchased it for my collection), and am voluntarily leaving a review of this quirky romance.

She can’t let him score…
Call it superstition, but when a guy bats as hot as Brooks Elliott, you don’t mess with what’s working. And what’s working is him keeping his pants zipped and doing all of his scoring on the field.
So when I hear he’s planning to ditch his V-card now that he’s been traded to baseball’s lovable losers—aka my home team and my reason for living every March through October—I do what any rational, dedicated, obsessed fan would do.
I make a plan to stop him.
But the thing about stopping him is that it requires spending time with him.
Lots. And lots. And lots of time.
And the more time I spend with him, the more I like him. Not as the guy who’s going to help save my favorite team and finally bring home a championship ring, but as the guy who’s helping me in my quest to bring back the team’s old mascot. Who also loves making pancake and bacon sandwiches. And who would do almost anything for his love of the game.
But after all this time of jock-blocking him…do I even have a chance?
And if I do, are we both destined to a life of celibacy in the name of winning?
Jock Blocked is a home run of a romantic comedy featuring the world’s most superstitious sports fan, baseball’s oldest virgin hero, a rogue meatball, an adorable puppy with a cussing problem, and the best lovable losers. It stands alone and comes with a happily ever after more satisfying than a game-winning grand slam. 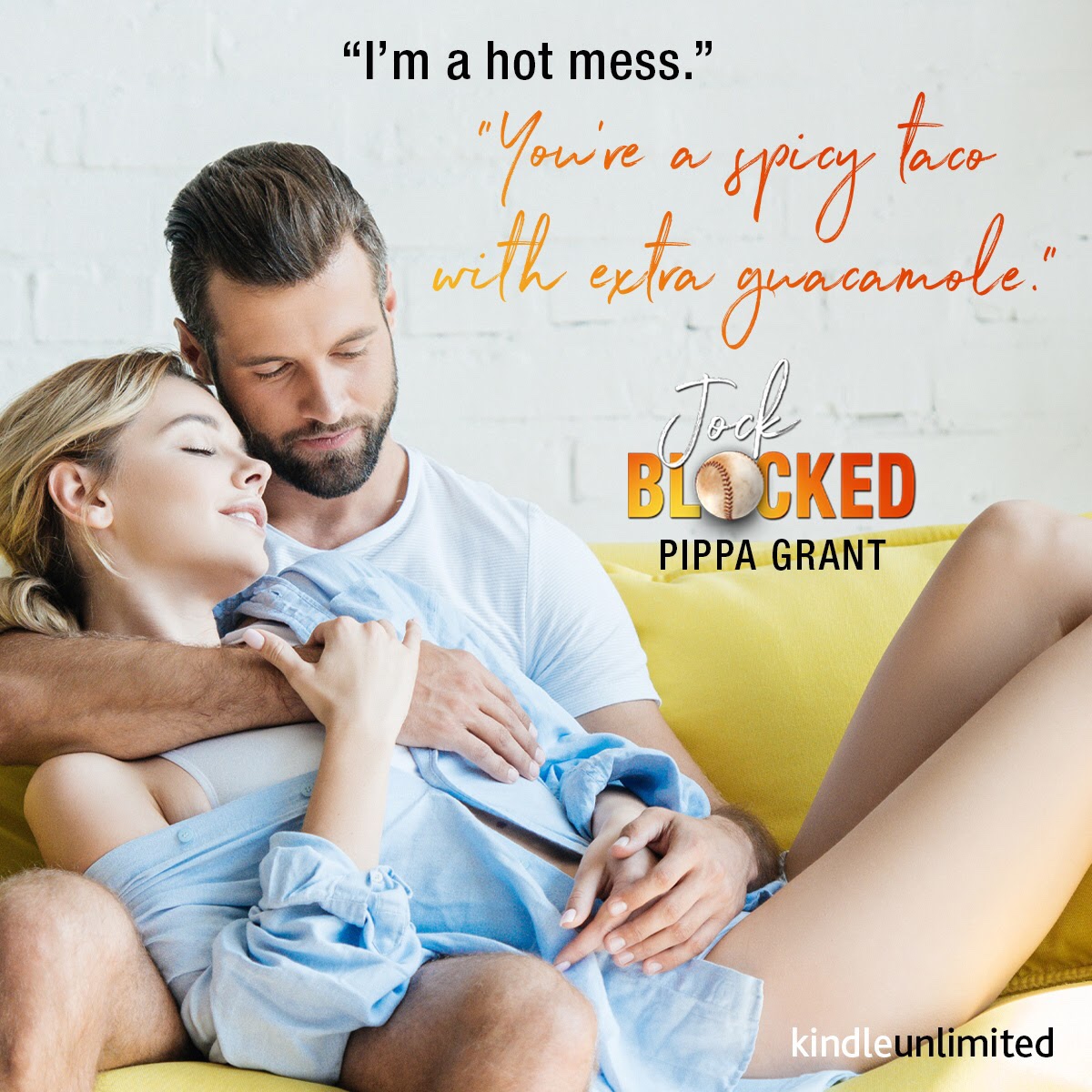 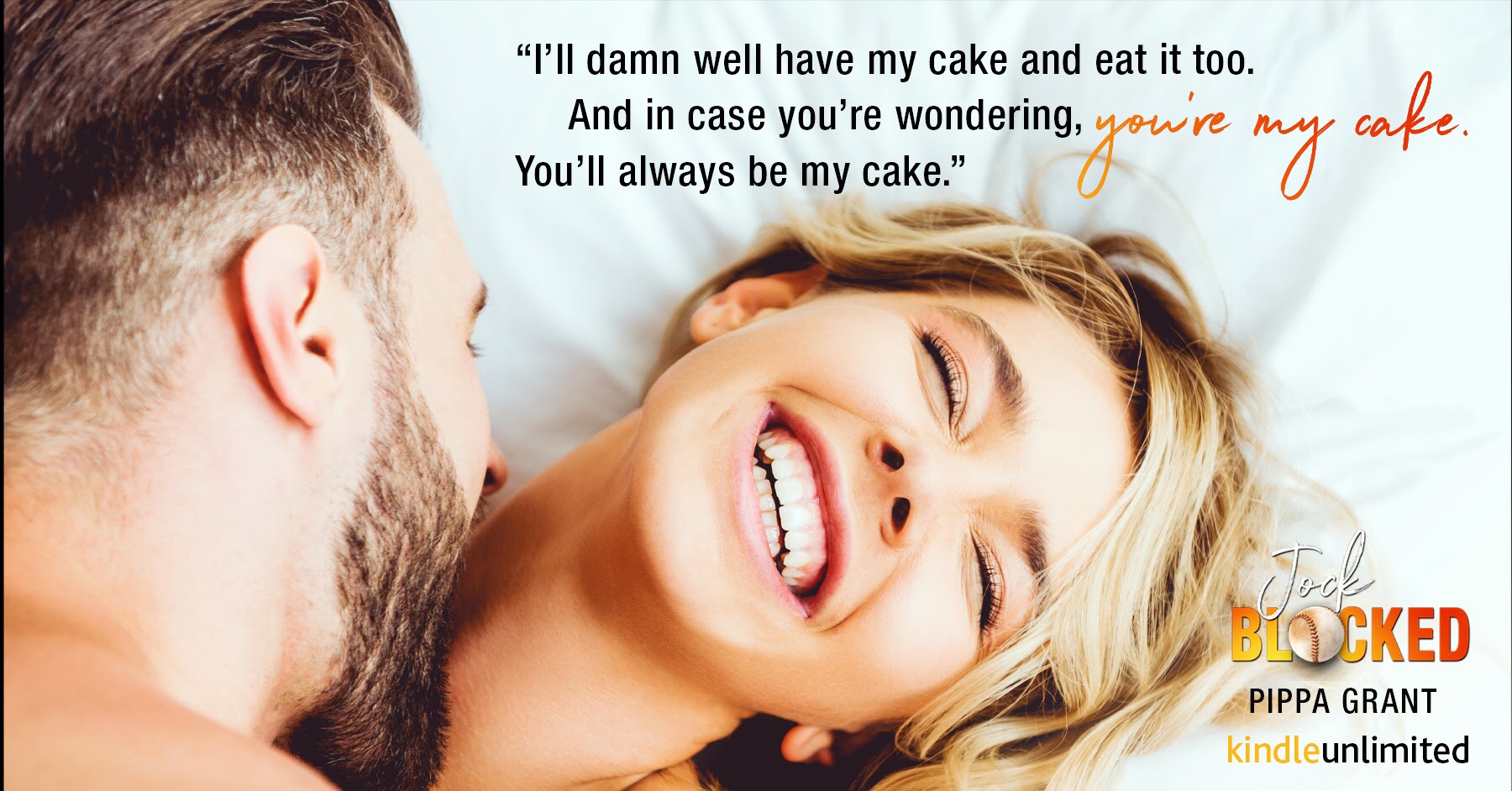 Mackenzie Montana, aka a woman on a mission
I never meant to become a criminal. But in the grand scheme of life, I don’t think I’m
technically engaging in criminal behavior.
At least, if it is, you could call it a crime of passion.
And I am very passionate in my belief that while the Fireballs need to make changes to halt their record-breaking streak of being the worst losing team ever to play
professional baseball, they don’t need to do it with a new mascot. Which is why
I decided to take two weeks off work and fly to Florida for spring training, where I’m not saying that I’ve snuck into my home team’s ballpark after hours to steal the worst proposed mascot costume, but I’m not saying I haven’t either.
Meatballs?
They actually let a meatball make the final cut.
I needed at least another full season to get over the fact that the new Fireballs ownership killed the last mascot, and here they are, letting fans vote on replacing
Fiery the Dragon with flaming meatballs.
I snort to myself while I creep through the darkened concrete hallways with a flaming
meatball swallowing half of my body.
If you’re going to steal a giant meatball costume, it’s best to act like you know what
you’re doing. And striding out of here with zero shame means two things—one, no
one’s going to stop me, and two, even if they do, I’m incognito.
It’s the perfect crime to counter the crime of killing Fiery.
I’m one turn away from the door that I left propped open for myself after hiding out in
the family bathroom after today’s game when voices drift toward me.
One male.
One female.
Neither is familiar, but as I get closer to my final turn, I realize the voices are
between me and my exit.
No biggie.
I got this.
I can stroll on by, flash a thumbs-up, pretend like I’m heading out to prank the
Fireballs at the team compound they’re all staying at, or to make a fast-food run for publicity.
Acting like I know what I’m doing inside this mascot costume is as easy as breathing. When you’ve seen thousands of baseball games in your lifetime, it’s not hard.
So I turn the corner.
And then I suck in a surprised breath, because that’s Brooks Elliott.
Oh. My. God.
Brooks Elliott.
The Fireballs’ newest acquisition. Like, so new he arrived yesterday. A mid-spring training acquisition, which is practically unheard of.
He plays third base, and he hits the ball like it’s evil incarnate and he’s an avenging
angel and it’s his job to send that evil into another dimension.
He could be the reason we legitimately have a shot at making it to the post-season.
And I am not going to hyperventilate like I did the last time I was face-to-face with a
baseball player.
Pretending to be a mascot?
I got this.
Talking to the players?
It’s like talking to the gods. 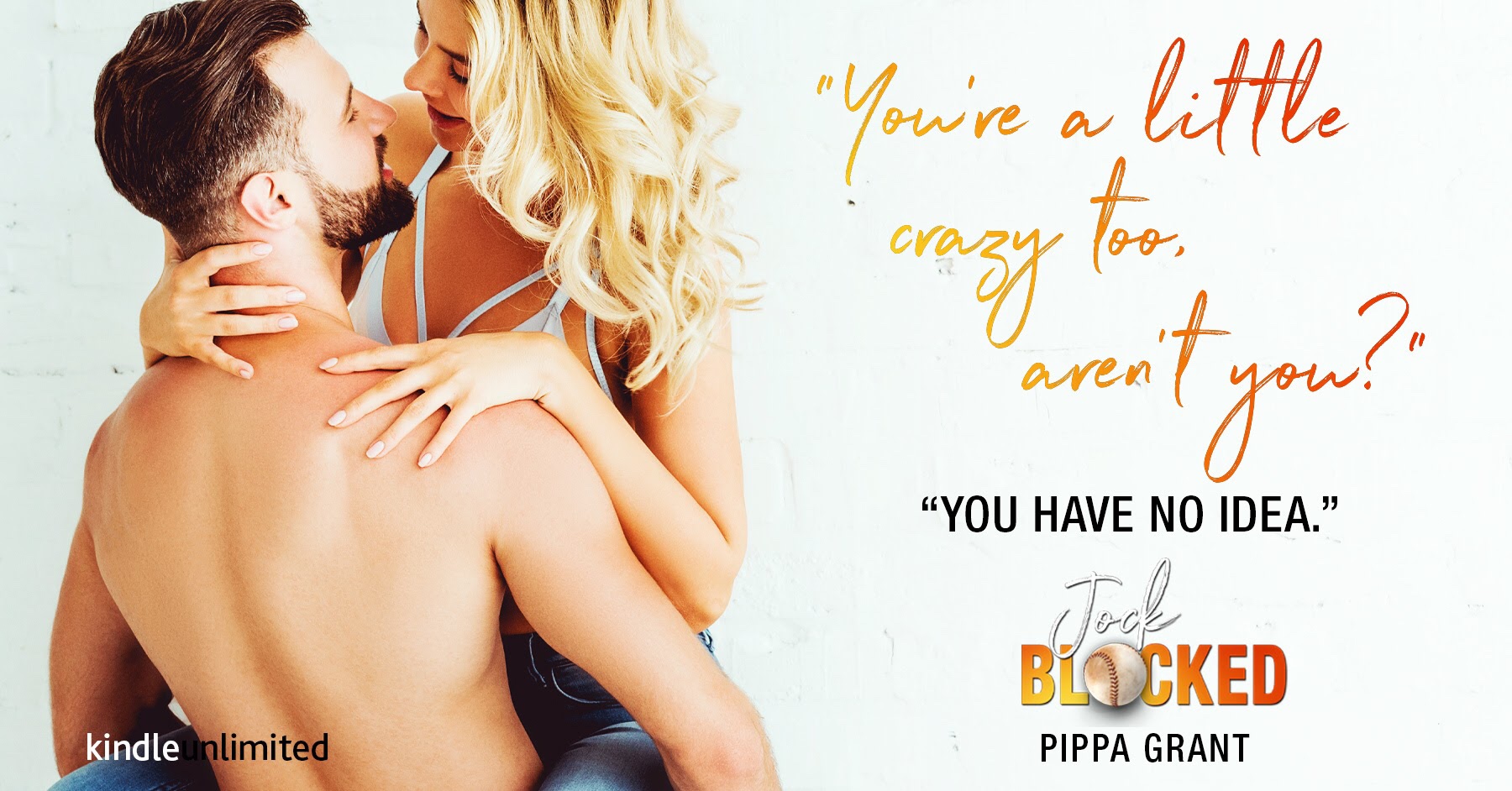 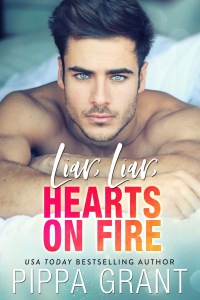 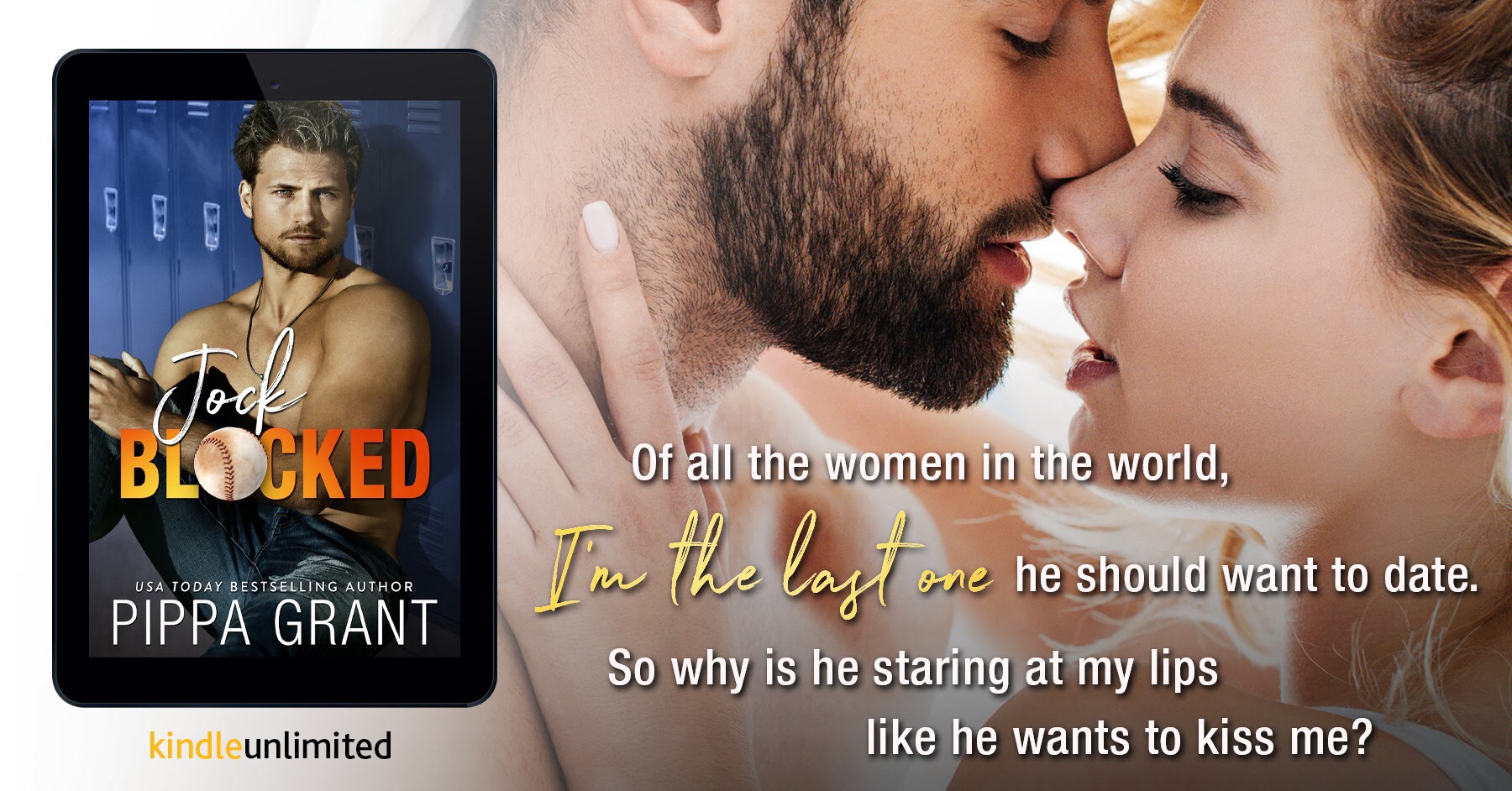 Pippa Grant is a USA Today Bestselling author who writes romantic comedies that will make tears run down your leg. When she’s not reading, writing or sleeping, she’s being crowned employee of the month as a stay-at-home mom and housewife trying to prepare her adorable demon spawn to be productive members of society, all the while
fantasizing about long walks on the beach with hot chocolate chip cookies.
Author Links
FACEBOOK
FACEBOOK GROUP
TWITTER
GOODREADS
BOOKBUB
WEBSITE
INSTAGRAM