Okay… WOW. This started enticingly sweet then slowly shifted into an engrossingly addictive read that had me staying up late to devour it. It’s my first from the author – and I’ll definitely be back for more. Which is kind of surprising given the number of things in the story that could’ve gone oh so wrong but were executed with skill and care. It’s a high octane adventure that sneaks up on you until you’re so caught up in the story that there’s no going back.

First, let me take a moment to address the many TRIGGERS. Don’t let the lightness of the romance fool you; this is a DARK story. I saw other reviewers mention that the book is dark and it didn’t seem to fit with the star-crossed lovers, instalove romance I was reading… until it did. There are some uncomfortable moments that many readers may find triggering. It also ends in a major, major CLIFFHANGER that will be resolved in the second half of this duet. That being said, the vast majority of this book is actually very light. It’s got a level of instalove that would normally be an issue for me, but worked with the Romeo and Juliet vibe that this book gives off in spades. They fall fast and hard but the reader knows there is trouble ahead. It’s extremely well written but doesn’t kick into high gear until the halfway point, which is when this launched into easy 5-star territory for me.

I guess I still haven’t told you anything about the actual story. This is definitely a play on Romeo and Juliet where there is no stopping a romance that’s meant to be, despite the many obstacles in the path to happiness. Nicco and Arianne are college students who meet when she is assaulted. He’s the son of a mafia boss, a prince in his own right, who is numb to the world. Arianne is a ray of pure, naive light that brightens up Nicco’s dark world. He feels an instantaneous connection to the sheltered girl, but resists the attraction because he feels unworthy of something so good. Arianne has a lot of growing up to do, but she does it quickly and is a much stronger woman by the end. There are some tender moments, gasp-worthy scenes, and an ending that will make you want to get your hands on the conclusion immediately. In summation…. read it. Don’t let the sweet, instalove vibes throw you off – this is GREAT once it gets going. I was lucky enough to receive an ARC via Give Me Books and am voluntarily leaving a review of this intense romance. 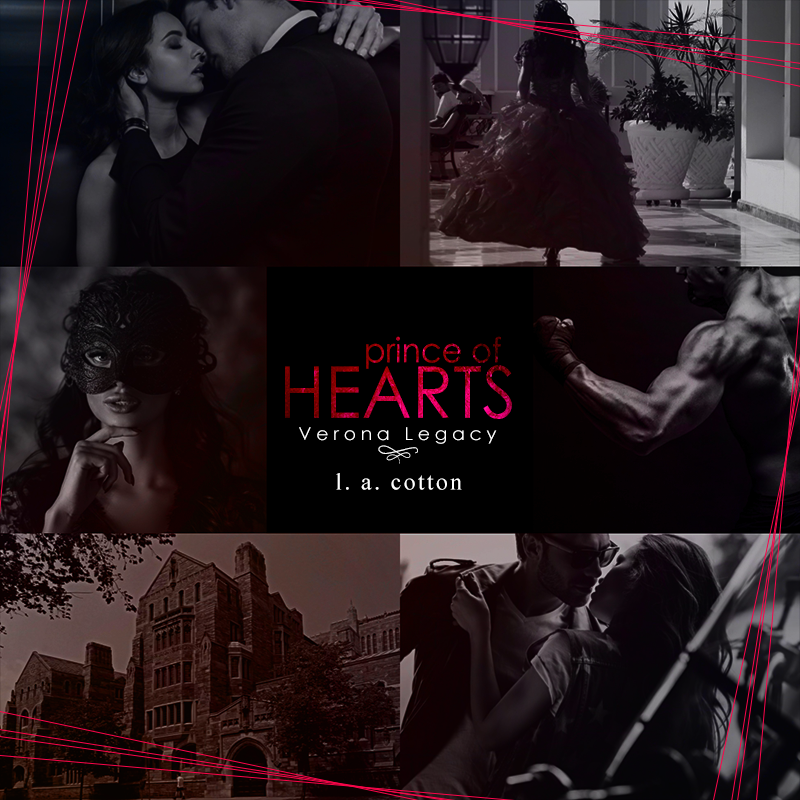 Arianna Capizola is her father’s daughter.
Humble. Hardworking. Honest.
She’d rather spend her days helping at the local shelter than brushing shoulders with her vain and entitled classmates.
Niccolò Marchetti is his father’s son.
Dark. Dangerous. Deceitful.
He’d rather spend his days getting bloody in the ring than attending class and keeping up pretences.
When their paths cross at Montague University neither of them are willing to drop the walls they’ve spent so long building. But he can’t resist the girl with stars in her eyes, and she can’t forget the guy who saved her that night.
There’s only one catch.
Nicco isn’t Arianne’s knight-in-shining armor, he’s the son of her father’s greatest enemy.
He is the enemy.
And their families are at war.
**Prince of Hearts is the first book in Nicco and Ari’s duet. Due to mature content that some readers may find distressing, this book is recommended for readers 18+
ADD TO GOODREADS
Purchase Links
Kindle Edition: https://amzn.to/303btFN
Amazon Paperback: https://amzn.to/3eQ3OPj
Audiobook: https://amzn.to/3eKXNmL
AMAZON UK / CA / AU
B&N / KOBO / APPLE BOOKS

“It’s a beautiful night,” I said from the shadows.
“Nicco?” She glanced around, searching for me. When her eyes landed on me standing by the corner of the building, she stood up. “What do you want?”
“Ahh, Bambolina.” I let out a weary sigh. “That is a loaded question.”
“Humor me.” Lina took a step closer. The moonlight danced off the soft features of her
face.
Jesus, she was so fucking beautiful.
“I want to kiss you.” I inched toward her, unable to resist the magnetic pull I felt
whenever I was around her. “I want to finish what we started earlier. I want to feel you beneath me, hear you cry my name.”
I want to make you mine.
“You couldn’t get away from me fast enough earlier.” Her confused gaze cut me like a
thousand tiny blades over my skin.
“It’s not what you think,” I said, moving closer still. Lina mirrored my movements until
we were standing in front of each other.
Until she was close enough to touch.
“What’s happening to us, Nicco?” she whispered. “Why do I feel like this?”
“What do you feel like?” I brushed the hair off her neck. She had a thick hoodie pulled
over her body, but I was still able to stroke the skin beneath her ear. Lina’s eyes drifted closed as she inhaled a shaky breath.
“I look for you when you’re not there. I feel you when you’re close. I can’t get you out of my head.” Her eyes opened again, fixing on mine. She smiled and it was like a bolt
of lightning to my heart.
This girl.
This innocent sweet girl was ruining me.

Author of over thirty mature young adult and new adult novels, L A is happiest writing the kind of books she loves to read: addictive stories full of teenage angst, tension, twists and turns.

Home is a small town in the middle of England where she currently juggles being a full-time writer with being a mother/referee to two little people. In her spare time (and when she’s not camped out in front of the laptop) you’ll most likely find L A immersed in a book, escaping the chaos that is life.